Learning in the poetic mode is not about studying but about doing, participating. It is pre-scientific, for the beginner, not the specialist, so the specialist, if he was never allowed to play there first, must go back to it in order that he may know his subject at a deeper, more intuitive level. It is about connection with reality through the senses, both internal and external. It is a form of knowledge, it is intellectual, but it includes the emotions. It values the whole, living thing, not the dead parts. It is about concrete experiences with reality either in actuality or vicariously through some medium.

It is your little girl watching a frog in your backyard pond, not dissecting it to learn it’s parts. It is your teenager understanding intuitively about a lever because he played on a see-saw for hours in his childhood or used a pitchfork to move hay on your farm. It is knowing the nature and the essence of a horse because you spend countless hours with them, not memorizing it’s anatomy.

Poetic knowledge is learning a language by speaking it, not by picking apart every word in the sentence, parsing and diagramming. It is feeling music inside you, dancing to it, singing, understanding tempo and pitch because it’s a part of you, not memorizing sharps and flats and chords and scales. It is living the life of a historical figure vicariously through a high-quality, engaging book.

It’s why our kids should spend loads of time outdoors in nature, playing in trees, on swings, with building materials, watching living things, staring at the night sky. It’s why our kids should listen to, dance to, and sing all types of music, hear poetry daily, create their own works of art in imitation of what they’ve experienced, play pretend, and generally have the liberty to just BE in the real world.

Poetic knowledge seems to be the key to motivation because it is about what is REAL and we are all desperate for reality. Connection and wonder are the driving forces. Love is the anchor.

Poetic knowledge synthesizes, brings together, integrates. It looks at the whole, the essence, the nature. This type of knowledge was considered completely valid in the ancient and medieval world, but has lost its validity in the modern mind, replaced by the rigidity of the scientific method which has laid claim to be the king of all forms of knowledge.

What an excellent book! I would put it up there with Norms and Nobility by Hicks and A Philosophy of Education by Mason as the triad of top educational philosophy books I’ve read (With Consider This by Glass as a close runner-up!).

It was a hard slog at the beginning, but once he got to Descartes it really started picking up speed and the last couple chapters were a breeze. I do wish he would have given more concrete examples at the beginning of the book instead of the end in order to “ground” the abstraction. That seems like it would have been more in line with the thesis of the book!

Highly recommended for all educators, those interested in epistemology, or anyone dissatisfied with the reductionistic mindset we’re all swimming in. It’s an eye-opening book, and I’ll be thinking about the ideas for a very long time.

“This position of poetic knowledge has no quarrel with the realm of the expert – the opera star or the physician – but it does hold that there is a proper order of knowledge… beginning with the poetic; without the observance of this order, one can “produce” pianists who can perfectly play the notes of the great composers without playing the music, and doctors who treat diseases but not the whole person who is ill.”

“Of course, there is real effort required at some point in learning, and often great effort is required to learn something well. But this is a situation that arises after the experience of wonder – if it arises at all – and the exertion for this kind of learning is usually in the student on the way to becoming a specialist or expert. And, even in the case of the specialist, the true scientist for example, there would always be the memory of the original love of the thing about which he first wondered.”

“A large problem with [Descartes’s] Discourse is that not everything is known clearly and distinctly as the Method exclusively calls for. As a matter of fact, there are different kinds of certainty; one, for example, in ethics, another in mathematics. Even with the most rigorous application of deductive reasoning, certain subjects of human inquiry do not admit to the same degree of certitude. To know that 2 + 2 = 4, indubitably, is not the same kind of knowledge as in knowing that a definition of justice is giving to each his due; nor is either one of these like the certainty I have that someone loves me. To demand that each field of inquiry, that all knowledge, yield a high degree of demonstrative certainty is, finally, unreasonable. The subject (object) of study, of course, is the determinate factor, and only mathematics, as Descartes holds, is capable of demonstrative certainty; whereas common experience allows for much that is the result of probable reasoning.”

“Sooner or later, it is all reduced to “facts.” This [modern, reductionistic] approach bypasses the contemplative nature of knowledge, leaving the student disconnected from his nature and the nature out there. Alone, though armed with Facts, such a student is likely to become arrogant with a sense of dominance over nature when the universe is seen more and more as an obstacle and problem to be conquered instead of a companion reality to be learned from.”

“Lecture appeals mainly to the intellect and even more so, to the extent lecture is prepared and planned, relies less and less on the intuitive connections within the memory of the speaker. In the end, lecture of this kind eliminates the surprise and delight in learning. The analogy of a traditional jazz band, improvising on a familiar theme, was used by the professors [at the Integrated Humanities Program] to describe their spontaneous conversations.”

“Basically, then, scientific education explains; critical education dissects; poetic education, by way of the integrated senses, experiences. Therefore, the position of the teachers of the IHP was that in the order of knowledge, experience comes first, but experience of two kinds, direct and imaginatively participatory. Because Dewey and the more empirically minded educators denied or ignored the metaphysical and transcendental dimension of the senses and emotions, only actual experience of things for them brought knowledge, and even this had to be a direct experience that involved manipulating the environment in some way to wrench knowledge from it. But both direct and vicarious experience are poetic under the philosophy of IHP, insofar as they remain uncritical and content to begin to learn in ‘wise passiveness.’”

“When a sentence is broken into its parts for the purpose of learning how to read and write, a child may become a whiz at identifying nouns, verbs, and adjectives, but the integrity of the language as that living thing capable of communicating living ideas is violated. Scientific grammar is studied, if at all, at the end of years of exposure to the literature of one’s tradition.”

“Historically important dates and names are not only necessary to know when learning history, but for students these can also be enjoyable, if those precise things are left embedded in the stories of history…. Textbooks of history should be avoided, for these are far too abstract for young minds, books about books, usually, that merely summarize events.”

“When a flower is taken apart and examined as pistil, stamen, stem, and petals, each part is seen exactly and a certain curiosity is indeed satisfied; however, curiosity is not wonder, the former being the itch to take apart, the latter to gaze on things as they are. Curiosity belongs to the scientific impulse and would strive to dominate nature; whereas, wonder is poetic and is content to view things in their wholeness and full context, to pretty much leave them alone. Stated as simply as possible, science sees knowledge as power; poetic knowledge is admiratio, love. In other words, take the students outside, regularly, and turn even a backyard into a laboratory of the open fields. Once again, textbooks at this level are a burden, they get between the student and the things of admiration. Let them make their own notes and pictures, poems and stories, about what they have seen. Biology is the observation of living things, not dead things.”

“For the desire of the real to rise up, there must be something real to arouse it, and gadgets, computers, and gimmicks used to hold attention, all taking place in classroom environments technologically insulated from reality, are simply parts of the generally unlovable atmosphere of modern education – unlovable because they are all efficiency, utility, and no longer beautiful.”

We own and operate a curated bookstore of vintage children's books including classics, poetry, history, nature, and more! 10% of profits are donated to charity for vulnerable children.
Click the image to shop! 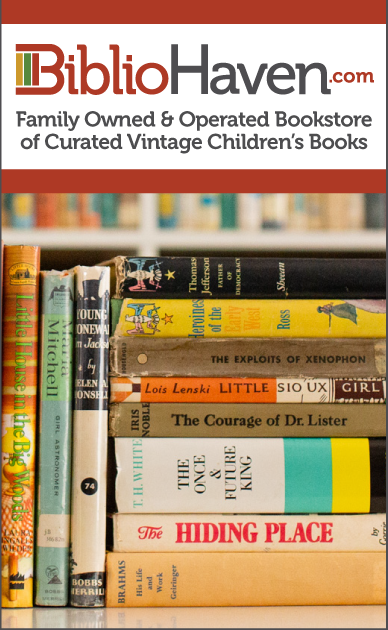